Hero: The Life and Legend of Lawrence of Arabia (2010, Michael Korda) 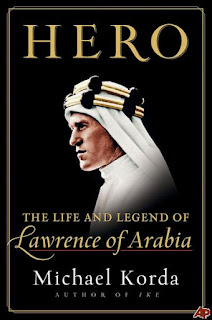 The most comprehensive Lawrence bio in 20 years, Hero attempts to repair Lawrence's reputation. Michael Korda might go a step too far in proclaiming Lawrence as a genius in everything he touched. Still, it's a judicious treatment of a man oft criticized but never fully understood. 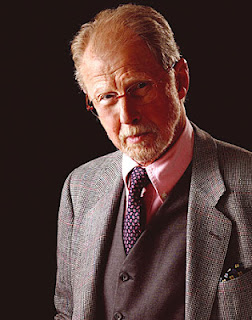 Michael Korda (born 1933) is the son of Zoltan Korda of the legendary British film family. Moving to New York, Korda spent decades as editor at Simon & Schuster, gaining notoriety for publishing racy novelists Jacqueline Susan and Harold Robbins. He's written numerous books, including biographies of Ulysses S. Grant and Dwight D. Eisenhower, Queenie (1985), a novel about his aunt Merle Oberon, and With Wings Like Eagles (2009), an account of the Battle of Britain.

Hero is a popular history with all the attendant virtues and foibles. It's extremely readable, Korda handling a dense, detailed narrative with delicacy. On the other hand, Korda's analysis of specialist areas (Middle Eastern politics, psychology) are shaky, with an unhappy reliance on secondary sources. He lards the text with awkward cultural allusions, such as quoting Casablanca when discussing Lawrence's pre-war encounter with an Arab bandit or comparing his subject to Princess Diana (!).

Korda begins in media res with Lawrence's most famous exploit: the 1917 capture of Aqaba. This awkward opening lasts for 100 pages before backtracking to Lawrence's childhood. Lay readers may prove overwhelmed by the barrage of dates, names and places, and Lawrence experts will note Korda's heavy reliance on Seven Pillars and Basil Liddell Hart. Fortunately, Hero recovers from this shaky start.

Unlike most biographers, Korda focuses on Lawrence's relationship with father Thomas Chapman. Noting Chapman's love of technology and intellectual pursuits, Korda also feels he shielded Lawrence from  his mother's more extreme impulses. "Ned not only learned from his father but worked hard to please him" (144), ultimately besting Chapman at his own hobbies. Korda's Sarah Lawrence mixes guilt, piety and protectiveness, but scarcely resembles the monster of Richard Aldington and Michael Asher's accounts.


Hero rejects common portrayals of Lawrence as neurotic. Korda depicts him as exceedingly erudite and likeable, with a "particular genius for friendship" (508) and craving for recognition. Korda views Lawrence as asexual but capable of strong attachments to men (Vyvyan Richards, Dahoum) and women (Janet Laurie, Charlotte Shaw, Clare Sydney Smith). Lawrence's ambivalence towards fame is a quirk rather than psychosis. In this account, Lawrence remains essentially the same man lifelong, despite his war-time trauma and guilt.

By Korda's reckoning, "there was always a germ of truth" to Lawrence's recollection of events (442). Korda discusses Deraa at length, accepting its validity because of the account's vividness, Lawrence's injuries and private correspondence afterwards. He accepts Knightley and Simpson's suggestion that Lawrence confused Hajim Bey with another Turkish officer. More minor anecdotes (Lawrence making Lord Curzon cry at a war cabinet meeting, forcing an obnoxious officer to salute him) are found equally plausible. His collaboration with Lowell Thomas amounts to idle ribbing that spectacularly backfired. Far from a braggart or liar, Lawrence at worst misremembered or playfully embellished events.

Korda grows rhapsodic discussing the Arab Revolt. He consistently plays up Lawrence's role, even his marginal involvement in Russia's capture of Erzurum and the diplomatic mission to Kut. Lawrence's colleagues receive due attention, though Korda uncritically accepts Seven Pillars' account of Feisal and his brothers. He echoes Liddell Hart in claiming Lawrence a self-taught military genius comparable to Napoleon and a pioneer in guerrilla warfare. Korda is extremely adept at battle writing, providing riveting descriptions of Arab victories at Abu el-Lissal and Tafileh. Lawrence's personal bravery is justly never in doubt.

Korda claims "no man ever tried harder to serve two masters than Lawrence" (400), desperately trying to square Arab sympathies with English allegiance. He depicts Lawrence's defense of Feisal at Versailles, criticism of imperial policy and involvement in the Cairo Conference. Korda's grasp of Sykes-Picot and the Balfour Declaration are fuzzy, undeniably inflating Lawrence's importance. One is amused by the assertion that the Hashemites brought stability to the Middle East: arguably true of Jordan, not so much with Iraq or the Hejaz. But Korda's account of Lawrence's rapturous reception in post-war Jordan demolishes the revisionist view that he was just another military adviser.

Sections on Lawrence's post-war career dabble heavily in speculation. Not unreasonably, Korda views Lawrence's descent into the Tank Corps and RAF more as an attempt to escape his wartime responsibility than a retreat from fame. He's undeniably right in rejecting Desmond Stewart's claim of Fascist sympathies. But Korda depicts Lawrence as a lifelong masochist, even while casting doubt on John Bruce's stories of flogging. Lawrence's youthful obsession with fitness becomes a prelude to self-torture in this dubious reading.

Balancing the conjecture are astute observations. We see a Lawrence whose work with boats and seaplanes was extremely productive. He also used his connections to affect RAF reform, and Lawrence's sympathy for rankers comes off strongly. Korda amusingly etches Lawrence's equivocation towards the limelight: he attends Bernard Shaw's Too True to Be Good incognito, only to sign autographs after the show! He shows Clare Sydney Smith as "the only woman who actually flirted with Lawrence, an experience... he seems to have enjoyed" (607). Far from a miserable hermit, Lawrence experiences "the best and most productive years of his life" (509).

Korda finds Seven Pillars overwritten but concedes it features "great pieces of modern writing about war" (310). He does defend its essential truthfulness, despite Lawrence's personalized view and downplaying the roles of men he disliked (Colonel Bremond, Hubert Young). On the other hand, he finds The Mint an implausible depiction of the RAF. Korda saves his greatest praise for Lawrence's translation of The Odyssey, feeling "nobody... understood better than Lawrence the difficulties facing a warrior... returning home, or could write more feelingly about it" (661).

Hero is a very good, old-fashioned biography. Perhaps Korda's idolatry is a bit much, but proves a welcome corrective to lingering skepticism. T.E. Lawrence is finally restored to his place as a genuine hero, warts and all.

Backing Into the Limelight by Michael Yardley

Want to see a work by or about T.E. Lawrence reviewed? Feel free contact me at groggydundee(at)gmail.com with suggestions. Please type Re: T.E. Lawrence in subject line.